AirBadminton is a new official sport and a cool addition to traditional indoor sports. The Badminton World Federation (BWF) launched this sport in May 2019. The ambitions are great: in 10 years the sport must be an Olympic sport!

How cool is it that AirBadminton can be played on the street, on the beach, in the parks, on the squares and other public spaces. Of course you can order all your AirBadminton articles at AllRackets.com

Watch the video below to get a good idea of ​​what AirBadminton entails. 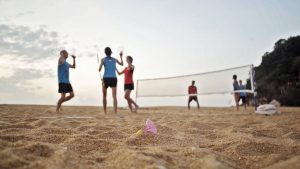 You play AirBadminton with a special AirShuttle. This custom badminton shuttle is specially made for AirBadminton and has a good flight, even in high wind.

Are you enthusiastic and do you want to stay informed about the developments and launch surrounding AirBadminton? Then sign up quickly!